Ecke is a German word akin to the English word “edge”, it also means node, vertex, corner and neighborhood: the safe place in which one finds peace.

“Ecke ist x” is a project that tries to find this missed corner for the children and young adults specially those with immigration background. “Ecke ist x” is also a homophone of Ekistics derived from the ancient Greek noun, o kisiV, meaning „building“, „housing“, „habitation“, and especially „establishment of a colony, a settlement , or a town“ (already in Plato), or „filling with new settlers“, settling“, „being settled“.  All these words grew from the verb  oikizw, to settle and were ultimately derived from the noun o koV, „house“, „home“ or „habitat.
By working with refugees it would become clear that the word “home” is an open wound that should be healed and handled properly. “Ecke ist X” is supposed to cover part of this task through a set of games and plays.

The aim of these set of plays is group-making giving this sense to the children that they are living and settling in a community. Pranayama and other breathing techniques could be practiced to give to strengthen the sense of settling with peace inside the body.

In this play the children will learn to let their hands and legs free to go wherever they will. This kind of dancing is similar to travelling. What is the difference between this kind of settlement inside our body and the time that we were sitting in lotus and meditating on our breath? This difference might be brought in compare in a discussion after dancing.

After a while the facilitator will ask the children to close their eyes and trust their body.

The group will be realized that travelling itself could be a kind of dwelling and accordingly immigration does not necessary mean losing the “home” as the “peace” is somewhere deep inside. A feeling that could be even strengthen by movement and involuntarily displacements.

The group members should feel free to express their ideas and feelings. For this reason they should free their voices. There are always some shy children that can not easily express their feelings and ideas. However for an architect -or an  Ekisticer or someone who cares for the settlement of his/her people- it is crucial to be able to defend of his/her plans. In this play, one player comes in the middle and starts to sing first after the rest of group shout loudly like a shower of voice. Even those shy children will dare to sing loud as they feel themselves self and immune inside this sound corridor from being heard by others outside. This play will increase the trust between the members of the group.

By asking the children to draw an ugly house they start to distance from stereotypical houses that they learned to draw in school and suggest a set of really creative suggestions that could even inspire experienced architects.

On the second round the facilitator may ask them to draw a beautiful house. The difference is astonishing:

This time the facilitator asks the children to make a house out of a set of graphical figures which are mostly letters borrowed from different languages and cultures. This time they have worked on tamil letters but drawings of this kind may be repeated in every session with different letters. The final comparison between the houses might be surprising for the children themselves.

What we learn from the very beginning of using this technique is that they start to think of details and functionality of spaces that they do not usually care about them when they start to draw a house on a plain white paper. 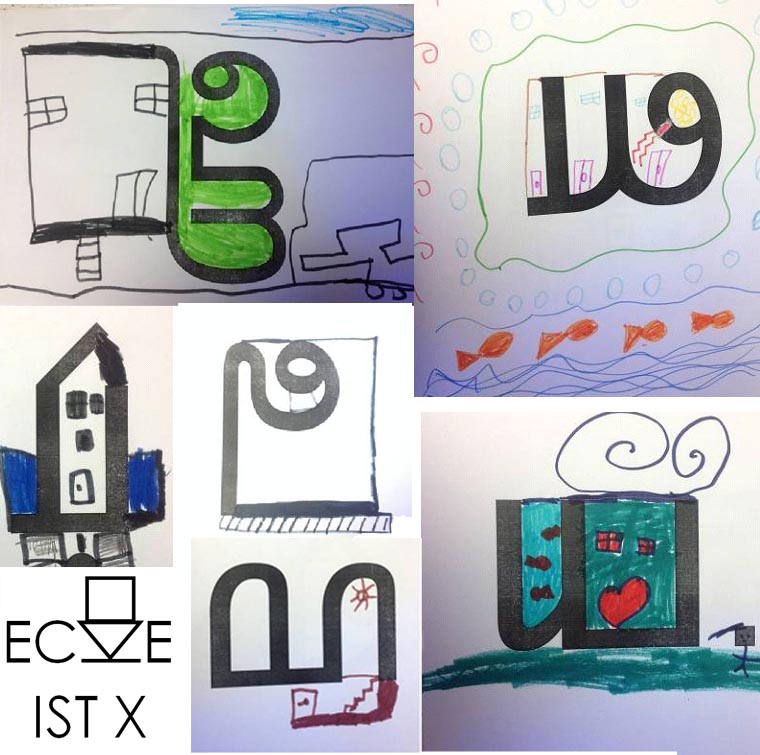 The children try automatically to find a function of the rooms and closed spaces suggested in the graphical motifs.

Architects in their atelier

First of all they should design and discuss their projects on paper:

Afterward every plan may be built up with bodies like this tunnel with flexible and intelligent roof:

A new monument for the city

The show may go on by using larger bodies for building more ambitious structures. A group of acrobats could be once hired for more advanced sessions.

In the next workshop I enjoyed the nice accompany of Kevin Koldewey, one of my best friends and mentors. We were in a refugees camp in Stuttgart:

The perfect and instant way that the children  got the rythem that was played by Kevin Koldewey reminds me of Peter Greenaway’s Intervals (1969):

„A short film which has its emphasis on back street walls with peeling posters and the constant pedestrian traffic in the foreground. It has a static camera positioned in front of the walls; experimental editing techniques, no dialogue-just background music, and quick edits of blackness throughout. „ ARCHIE MOORE <http://www.imdb.com/title/tt0064489/>